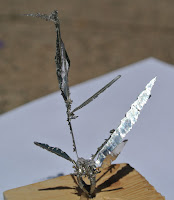 Encouraged by the success of my copper crystal growing experiment, I planned another metal crystal experiment - tin!  There are actually plenty of videos on growing tin crystals, but they all make terribly unsatisfactory small, flimsy crystals that can't even support their own weight out of water.  Using the same method I used for growing large, solid copper crystals, I successfully did the same for tin.

For this experiment, I initially used tin II chloride (about 90 grams per liter) acidified with a bit of HCl as the electrolyte.  A blob of tin and a strip of tin functioned as the anode and cathode, respectively.  As in my copper crystal experiment, the anode was on the bottom of my glass jar cell while the cathode poked into the electrolyte from the top.

The same sort of LM317 adjustable voltage regulator circuit was used, including the string of six diodes on the output.  Each diode drops a certain amount of voltage, so with a series of diodes, the lowest achievable voltage drops from the LM317's 1.25V down to about 0.25V.  This is critical for getting very low currents and slow crystal growth, which lead larger, more solid crystals.

I kept a thorough log of my observations during the experiment in a lab notebook, and the text of this may be viewed here.  The first try at growing the crystal worked fairly well, producing a solid result with some shiny crystal faces.  I couldn't really get the current to below 10mA or else it would drop almost discontinuously to 5mA.  I tried running the cell at 5mA, but I don't think tin was actually depositing.  A weird grey gunk started to grow at the cathode, and this turned out to be very brittle and crumbly out of water.  Upping the voltage just slightly to get ~10mA fixed the problem and tin crystals started growing again.  I also had to swirl the solution around a few times, and I think that this caused debris from the anode to get kicked up, which could have caused more small crystals to form, which is undesirable.  There was also some cloudiness at the end of this run, which may have been SnCl2 hydrolyzing in a not-acidic-enough electrolyte.  This should be avoided for best results.

To improve the experiment, I grabbed a small DC motor (probably scavenged from some dead electronics) and made a stir stick using an old plastic tube from a pen.  I powered the motor with another LM317 circuit so that I could get the lowest RPM.  This functioned as a very gentle agitator for the electrolyte cell to ensure the concentrations of tin chloride remained well-mixed.  Otherwise, the denser, more concentrated SnCl2 coming off the anode would stay at the bottom while the cathode would deplete the upper part of the cell of its SnCl2.  This seemed to work OK.  The resulting crystal did not have any grey gunk, but many of its crystals were smaller, though very solid.  There may have been more HCl in the solution than with the previous run; I had to re-acidify it to dissolve the cloudiness observed after the first run. 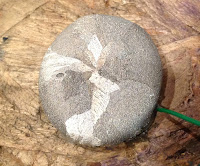 One interesting thing I noticed is that the tin anode made crackling noises as it cooled from being cast, and after using it as an anode, electrochemical etching showed some really neat crystals inside.
I wonder if more metals would do this.

Still not quite satisfied with the crystals, I removed 30mL of the electrolyte from my cell (a tall glass baby food jar with a ~140mL capacity) and replaced it with tap water and a few drops of HCl (to ensure the solution stayed clear) for a new concentration of about 60g/L.  I used the same stirring technique as before, but this time, the crystal grew extremely quickly, taking less than 48 hours to grow to the bottom of the cell.  It also formed absolutely enormous crystal faces, with unblemished, flat, shiny parts a few centimeters long.  Through all three crystal growing runs, the current stayed below 15mA and the voltage was (according to the voltmeter) between 40 and 150 millivolts.  Thus, it seems that low current along with low(er) Sn2+ and HCl concentration is key to growing large crystals.

Once again, a microwave turntable motor was used for making 360° video of the crystals.  Unlike the copper crystals, these tin crystals do not tarnish, so they will retain their awesome shininess indefinitely.  :)  Perhaps it is time to try some new metals for crystal growing...
Older Post Home

Welcome to this website! Check out all the chemistry swag, metal-melting craziness, electronics schemes, and generally awesome projects! Feel free to use the contact page for questions and comments!